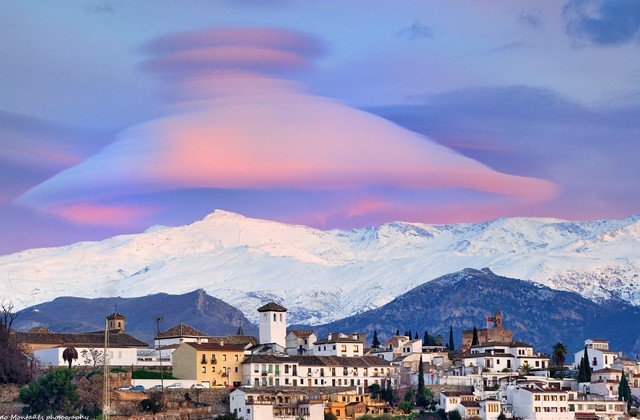 The disappearance of billionaire and record-setting aviator Steve Fossett a little over a decade ago brought renewed interest in the Nevada Triangle, a large section of land where either an estimated 2,000 planes have crashed... or gone missing.

Some people suspect a supernatural force is to blame for the mysterious vanishings.  That the area is also home in part to the infamous Area 51 has only added to the mystery, though it should be noted the area also includes the Nellis Air Force Range where a number of crashes can be attributed to testing of military aircraft.  Nevertheless, as one video embedded below points out, many of the private or commercial crashes over the years occurred without any distress calls.

Although it was a little over a year before Fossett and his airplane's remains were discovered, the interest and speculation that ensued help to shed light on the likely causes for so many crashes - many of which have yet to be discovered.  If you've ever flown from California into Las Vegas during the summer with turbulence on a clear day, you may have experienced a small fraction of the the forces at work that have brought down so many unsuspecting aircrafts over the years.

Where: Located approximately from Reno, NV, to Fresno, CA, to Las Vegas, NV.

How Big: The area is comprised of over 25,000 sq. miles, which is over 1/4 the size of Great Britain.  Other than the three cities mentioned, the area is very sparsely populated with a good portion of it comprised by the Sierra Nevada mountains, the Nellis Air Force Range and other Federal properties such as the aforementioned Area 51 and Nevada National Security Site.

Number of missing/crashed aircrafts: It is unknown, though speculated that over 2,000 planes have either crashed or gone missing over the course of the last 60 - 70 years.  Many crashes from years prior are routinely discovered; eight alone were found during the search for Fossett which included a plane and remains of a man, Charles Ogle, who had been missing 43 years.

Earliest Disappearance: One of the earliest known disappearances in the Nevada Triangle was in 1943 when a B-24 Bomber crashed.  Another nine B-24s were sent out to locate the bomber, only to result in another vanishing.  The two bombers would eventually be found, one in 1955 when a reservoir was drained and the other in 1960 by surveyors from the United States Geological Survey (USGS).

Steve Fossett: Fossett was a billionaire who was the first person to fly around the world non-stop in a balloon.  He held over 100 world records at one time or another, including 60 at the time of his declared death in February of 2008, five months after his plane went missing September 3, 2007.

A little over a year later in September 2008, a hiker would find Fossett's identification cards in the Sierra Nevada mountains of California which later resulted in the discovery of the wreckage and two large bones, presumably scattered by wild animals, that matched Fossett's DNA.

Mountain Waves: The suspected cause of Fossett's, as well as numerous other, crashes.  The phenomenon is caused by warm air cooling as it rises over the Sierra Nevadas, resulting in a strong downward draft into the valley that may result in a microburst.  Once there, the air warms up again and causes a strong upward force as it rises.  The changes in weather can be extremely rapid and unpredictable, especially considering Mt. Whitney, the highest point in the lower 48 states at over 14,000 feet, gives way to Death Valley, the lowest point in all of North America.

The Mystery of the Nevada Triangle – Timeline World History Documentaries (48:08)

What Happened to Steve Fossett? Was The Nevada Triangle To Blame? – Paranormal Junkie (5:36)