Time: Between 8:15 and 8:19 PM Local Time, though the incident in its entirety lasted 32 minutes as the object, tracked by NORAD, crossed a total of ten states.

Location: The incident actually began on the east coast, first spotted in Oneida, New York, just outside of Syracuse.  It crossed ten states, including Kansas, Colorado and Utah, before disappearing from Nellis Airforce Base radar at 10,000 Feet.

Response: The Air Defense Command was alerted after the object was tracked by NORAD.  The object apparently landed at one point, confirmed by an Air Force Spokesman.  During the 42 minutes it was on the ground, all power was lost from a nearby power station.  Power was restored once it left, at which time it was pursued by jet interceptors summoned from Phoenix and Stead Field in Reno, NV.

Outcome: Jets pursued the object until it exploded over the Mesquite Range in Nevada "in a brilliant glare that was visible over five states."

Witnesses: Having crossed from the east to west coast, the object was seen by literally thousands of people. 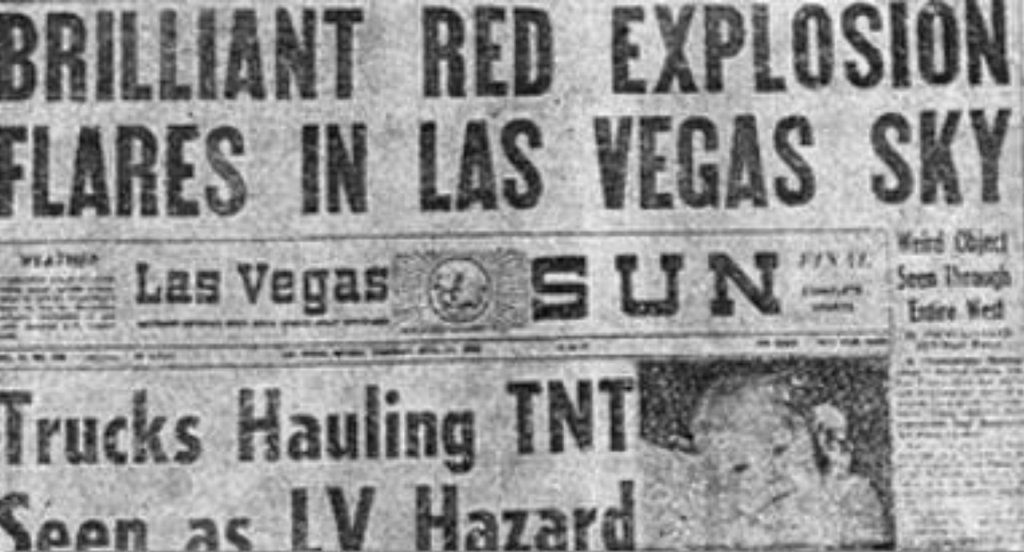 It has been described as a red or blue fireball; a red-flaming sword across the sky; an object resembling a tadpole; a very bright, white light was a smoke trail behind it with twenty-to-thirty explosions.

Witnesses in Utah claimed it was no more than 500 feet above their truck, causing it to nearly stall at the time.

According to Captain Herman Gordon Shields, who was interrogated at Hill Air Force Base by Douglas M. Crouch, the chief of the criminal investigation sections:

"It had a long slender appearance comparable to a cigarette in size, that is, the diameter with respect to the length of the object. The fore part, or the lower part of the object was very bright, intense white such as a magnesium fire. The second half, the aft section, was a clearly distinguishable yellowish color. I would say the object was just about divided in half, the fore part being intensely white, the aft section having a more yellow color to it."

Observer 3 miles south-west of Eureka, Utah reported object passed over in northwest direction, alternately emitting gasping sound, retarding forward movement, and surging ahead three or four times, before flame at tail of object turned from bright yellow to blue. Observer stated object arced over and estimated that object landed in vicinity of M6.

[2]At 06202 on 19 April 1962 Captain Herman O. Shields, Troop Carrier Squadron, a reserve AF pilot and civilian Attorney at Law was interviewed at Bill AF3, with a tape recording being made of the interview. The following information and answers received to questions...

15a(l) Shape - A long cylinderical shape like a cigarette.

15a(2) Sisse - At the distance object appeared to be the size of a cigarette.

15a(3) Color - The forward or lower part of object was a bright intense white. the after half was a clearly distinguishable yellow color.

Apparently only one newspaper initially covered the incident, The Las Vegas Sun.

Dr. Robert Kadesch, an associate professor of physics at the University of Utah, dismissed it as probably being a "Bolide," an extremely bright meteor.

The radar sighting at Nellis Air Force Base initially reported the object as "unidentified," but later changed it to "Insufficient Data For Scientific Analysis."

The Nellis Air Force Base Incident

Other Area Incidents Over The Years